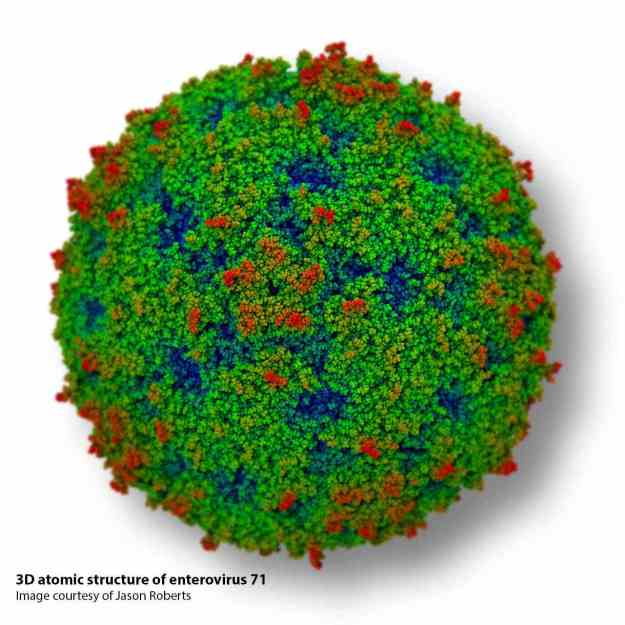 Last year was a big year for Science Mojo’s reporter. A multimedia story about an outbreak of a common retrovirus that affects young children (EV71) was:

One of four students shortlisted from over 30 entries

To view the multimedia story (text, graphics and video) in The Citizen, see below:

The shorter version of the text was also co-published by Fairfax (The Age and Sydney Morning Herald) in print and online across Australia:

And there was a follow-up article in Fairfax publications

I’ve never been one to make New Year’s resolutions but I always find myself looking back on the fading year to glean a message for myself. This year I fought to re-gain perspective and remember what’s important in life. To help me tell you what I mean by that, I need look no further than NASA’s Black Marble: City Lights 2012.

If you look at the entire Black Marble image of Earth, you can see that the city lights of my home country, Australia, are insignificant compared to the rest of the world. If you then look more closely at the image of Australia (below), it is Nature’s rampaging fires over Western Australia that light up our continent, dwarfing the lights of our major cities.

No matter how important we think we are, the forces of Nature will win out in the end. It might sound strange but I find my own insignificance in the Universe surprisingly comforting.

Image credit: NASA Earth Observatory/NOAA NGDC. Images taken from theSuomi NPP satellite on cloud-free nights in April and September 2012 were assembled to give this perspective of planet Earth.

A great place to start getting a feel for what’s available is the Scientific American Citizen Science blog or the just-launched PLOS blog CitizenSci.

This post is a quick run-down of the types of projects for citizen scientists, ranging from crowdsourcing for online analysis of data to DIY science.

END_OF_DOCUMENT_TOKEN_TO_BE_REPLACED

My mother and I once had an argument. Actually, we had many arguments but the one I’m talking about involved a hypothetical situation. I argued that if you took a whole lot of people from 2000 years ago and plonked them in our time, they would be able to pick up all the technology we use and have the same intelligence as we do. Even though she couldn’t use the video recorder, she argued that they wouldn’t be able to cope and would have lower intelligence.

I always thought our discussion was pretty obscure but I have just read that, in the absence of my mother, others have carried on the argument.

Professor Gerald Crabtree from Stanford University opens the first of two papers in Trends in Genetics with the following words.

END_OF_DOCUMENT_TOKEN_TO_BE_REPLACED

NASA has just reported that the ozone hole over Antarctica is the smallest it’s been in 20 years.

There isn’t much talk about the ozone hole these days but it was often in the news in the 1980s, just as “climate change” is in the news now.

Ozone in the atmosphere helps to protect the Earth from ultraviolet (UV) radiation. As we all know, increased exposure to UV causes skin cancer. In the 1980s when the ozone hole first appeared, the fear of an expanding hole in our protective shield was not good news for Australia, given our proximity to Antarctica.

END_OF_DOCUMENT_TOKEN_TO_BE_REPLACED

A recent article in PLOS ONE reminds us that SCUBA divers also have a role to play as citizen scientists. SCUBA diving instructors and boat skippers helped to collect data about manta ray sightings and movements near Lady Elliot Island at the southern end of the Great Barrier Reef, Australia.

This type of data can help scientists understand the behaviours of species that are under threat so that suitable management strategies can be put in place.

END_OF_DOCUMENT_TOKEN_TO_BE_REPLACED

Science and health reporting has copped a lot of flak over the years. The report of the “scientific breakthrough” has become frustrating and annoying (and perhaps an ethical issue), especially to people who are sick and desperate for a cure.

Certainly, if you believed everything you read in the newspaper in the 1990s, breast cancer should have been cured in 1998 and the sequencing of the human genome should have “transformed medicine”.

There are three main players in this particular media game:

A study just published by Yavchitz and colleagues in PLOS Medicine looked at the interactions of all three players. The results suggest that scientists should look carefully at their own writing of scientific papers, as this can have a role in disseminating “spin”. I think this finding would surprise many scientists.

The study examined a cohort of randomised controlled trials (RCTs) that are considered the “gold standard” for testing the effectiveness of therapies. The authors examined “spin” in the conclusions of the scientific abstracts (the summary of the study) of the original published paper and in the corresponding press release and news story.

The authors defined spin as “specific reporting (intentional or unintentional) that emphasises the beneficial effect of the experimental treatment”.

To me, the results were startling.

END_OF_DOCUMENT_TOKEN_TO_BE_REPLACED

Let’s say you had a tumour surgically removed from your bowel. Would you agree to have residual tissue stored in a biobank for use in future research? What if you and your partner produced embryos for In Vitro Fertilisation (IVF)? Would you want those embryos used for other purposes?

Biobanks are a growth industry. Estimates put the number of stored specimens worldwide from 1 to 2 billion and growing. Samples can include blood, saliva, a variety of tissues or extracted DNA.

In a nutshell, these “banks” of human samples can be used for a number of purposes, but the growth areas are in human tissue banking, stem cell banking, the IVF market and clinical trials.